At first sight it appears that John spent a lot of time ashore for an RN sailor, however there is a common theme to many of his postings from 1941-1944, and that is RDF, now known as Radar. Radar was coming into the fore as the way of directing guns to the right position to fire and hit the target. Not only was there a need to train users of Radar, it was changing and improving rapidly all through the war. He mentioned ‘Anti-Radar’, now known as ‘jamming’. 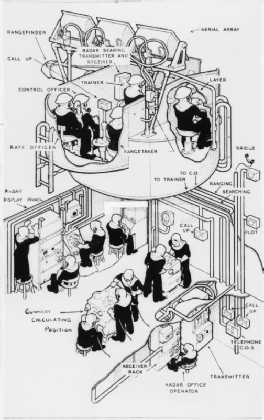 There are a huge number of variables to take into account to calculate an accurate angle and height of the gun, given that both ships may be making turns to try and avoid being hit. Not to mention the action of the sea causing the ship to pitch and yaw dramatically, all of which needed to be allowed for. 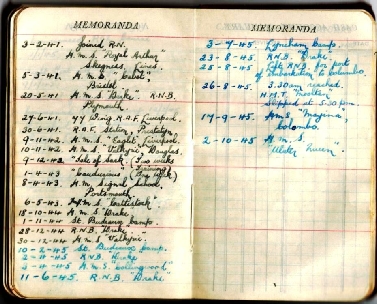 This is John’s list of ships he was posted to. Many of these were about Radar:

After serving on HMS Cattistock: HMS Collingwood 2 months when they were setting up a new radar school.

In a typical World War II British ship the fire control system connected the individual gun turrets to the Director Tower (at the top where the sighting instruments were) and the analogue computer in the heart of the ship. In the director tower, operators trained their telescopes on the target; one telescope measured elevation and the other bearing. Rangefinder telescopes on a separate mounting measured the distance to the target. These measurements were converted by the Fire Control Table into bearings and elevations for the guns to fire on. In the turrets, the gunlayers adjusted the elevation of their guns to match an indicator which was the elevation transmitted from the Fire Control table - a turret layer did the same for bearing. When the guns were on target they were fired from the Fire Control Table.

It seems evident that John’s career was involved in the rapidly developing field of Radar, and learning how to use it to control the guns. Just before demob he was passing on that knowledge as they set up the new radar training school at HMS Collingwood.

Many thanks to Barbara Adams for sharing this information