The sailors were transferred to a surface vessel, then to Surabaya. They were able to embark for Australia and safety.

Many of the sailors of other warships which took part in the battle were not so lucky. Many of those that survived became Japanese  prisoners of war and suffered terribly.

Jim and the crew of HMS Electra were still alive, though they spent 9 hours in the water in Carley rafts.

Jim recalled to his son Alan: ‘the event was horrendous and, when the ship was abandoned, he was in an over-manned Carley Float having to swap places with those hanging onto the side until rescued.’ 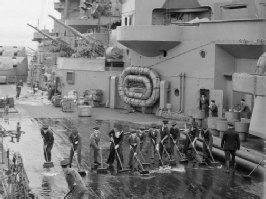 HMS Electra sank about 1800 hours on 27 February. Yet the battle continued through to midnight. There must have been many sailors in the water from all the ships, even though many had been rescued by other warships.

Jim went to sleep in the cramped submarine, on the basis that “If I am going to die at least it will be in my sleep!”

The Battle for Java Sea

The Allied forces collected in Surabaya were outfought by the Japanese with their superior air power, modern ships with well-trained men and reliable long-range torpedoes from both the air and from ships. As happened in the defence of Singapore the Allies had failed to recognise that Japan’s previous 10 years of fighting in Korea and China had allowed them to create good weapons and experienced and heavily motivated men.

The Carley Float was standard issue

They were made in 3 sizes which fitted inside each other and had rations strapped inside.  This image shows them on the wall on HMS Rodney. They had a copper tube for a watertight frame, covered in cork or kapok to help it float with a waterproof covering and wooden straps or webbing for the floor.

They needed little maintenance yet could be thrown into the water quickly.