During this period they had deep snow and ice, and the division history describes the problems of how to give 40 tons of tank enough traction on ice.

By January 1945, they were moving into position to start clearing the area between the Rivers Rhine and Maas, and February saw them just behind the Canadian front lines at Groesbeek.

This is the point at which 23 LFA were pulled back to UK, embarking 9 Feb 1945. The next battle for 34 Armoured Brigade was through the forest south of Neijmegen, during which 9 RTR Regt and 107 Regt were reduced to one third their strength by casualties. 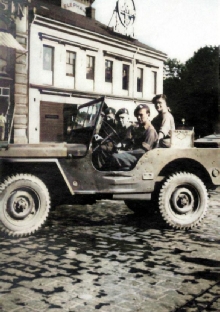 23 LFA back were pulled back to replenish 181 Air Landing Field Ambulance, which had lost a lot of men at Arnheim in Sept 1944 as casualties and prisoners. They needed to rebuild it to support future airborne invasions. They were reformed 1 March 1945 and mustered near Cambridge whilst recruits were trained. 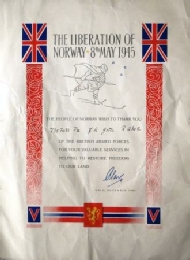 Russia had been fighting Germany in the East, so there were many Russians who had been captured by the Germans and held as Prisoners of War, some in Norway. 181 Air Ldg FA had the job of escorting the injured back to Russia on the ship MV Stella Polaris.

Here are Dad's notes of dates and places on two trips:

He boarded ship to return to UK on 3 September 1945, arrived in UK on 6th Sept and was demobbed on 18 October 1945. This photo is from a group photo at the time of demob.

So his army career consisted of two years in training, eight months supporting very hard fighting in France, Belgium and Holland and four months in a more relaxed way supporting the return of Norway to normality. 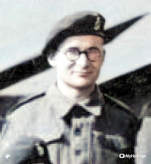 With the surrender of the Germans on 8 May 1945, they were not needed for their air landing role. Instead 181 Air Ldg Fld Amb flew out ("emplaned") on 11 May to support the handover of control to Norwegians.

So just 'being there' was important, as said by Knut Stubberud from Oslo, whom Dad got to know. With Norman Trigg and Iain Hosie, his two best friends, they used to take out Knut's fishing boat.

Thanks to Linda for her help with this