George bp 1781 in East Ruston, m Hannah 113 Sexton in 1816 in G Yarmouth He was a sailor and they raised a family in East Ruston, though in the 1841 & 1851 they are living separately with George at his brother James in Dilham, whilst Hannah and the children are in Gt Yarmouth.

All the family except George appear to have moved to Hull. They are discussed on this page Hull families

John bp 1783 in East Ruston, m Phyllis Chingles in 1845. Their children include:

For more detail of these trees see later pages on USA.

James 138 and Elizabeth Clayton had one son George 1120 b 1854 in East Ruston. He married Ann Hubbard in 1874 and had five children. These include:

Elizabeth Ann had a base-born son Thomas James Charles 742 b 1898 at Happisburgh. He married Hannah Ellis in 1919 and their family grew up in the East Ruston area. 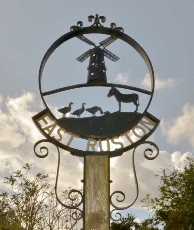 East Ruston featured well in this family tree, with some 60 members born, died or lived there. The village featured in Sir Arthur Conan Doyle’s, Sherlock Holmes book, ‘The Adventure of the Dancing Man’. as the site of Abe Slaney's hiding place. Ruston comes from the Old English for ‘Brushwood enclosure’.

Much of the life would be farmwork, with the majority of the occupations of Gottses being agricultural labourers. A few were millers, especially at Dilham. The mechanisation of agriculture caused several to move to other parts of the country: Hull, Middlesbrough, Hartlepool, Durham and Tyneside. Others went to America, often via Canada first.

Click here to read the poem about emigration from East Ruston in our “Stories” section: Stories