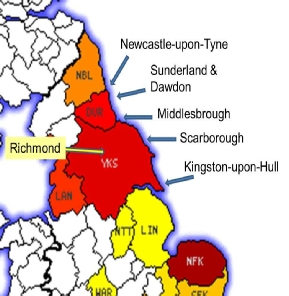 This family is a simple example of the way families were breaking up and moving out of Norfolk. This map shows where many of the grandchildren of George 101 moved. Other families also went North, as well as to the Lancashire cotton mills, overseas to USA, Canada, Australia & New Zealand.

Out of 29 grandchildren called Gotts who survived to adulthood we know of 17 who moved North or overseas.

They all have a story to tell, but it shows how the period from 1860-1880 resulted in significant change, driven by mechanisation of farming, growing coal mining and iron making in the North East, and more work in USA. The next generation continued to move, eg to Australia.

I know that other families went through similar experiences, but this gives a picture of how life was changing in Norfolk.