Carole Precious has sent this Long Service Award for Thomas 1582:

Thanks to Carole Precious for this 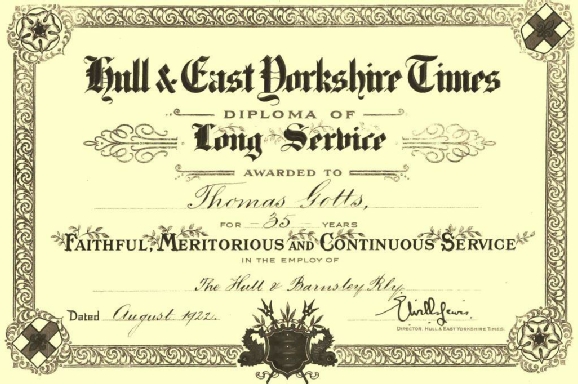 So this award was issued by the local newspaper to Thomas in 1922. For 35 years service that means he would have started with them in 1887. Born in 1871, he must have been 16 when he started, and hence 51 when he received this award.

In both 1901 and 1911 census his occupation is described as ‘Engineer’s fitter’ so he obviously worked on keeping the railstock running. According to Carole he continued to work as a fitter and turner for H&B Railway until his retirement.

His brother George Henry 1609 was also working for the railway as noted in the 1881 census as a ‘Railway Servant’.

The Railway records in Ancestry are more precise:

Unfortunately, there are currently no records for Thomas.