In the 1871 census Sarah is at Frenchgate, St Mary Parish, Richmond,Yorkshire: 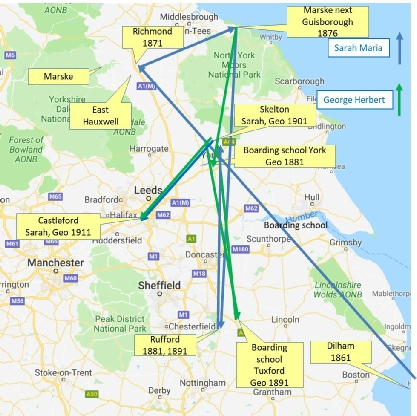 1881 she is at Leighfields, Rufford, Notts, with her sister Mary Ann & Charles Harris Ducker:

Her son George Herbert (3403) is in a boarding school in York aged 4, and is noted as born in Marske next the Sea. This is a different Marske to where sister Elizabeth was living in 1871, and is where her brother James 130 and his wife Jessie were living in 1881.

In 1891 Sarah is at Park Lodge, Rufford, Notts, with brother in law Charles who is now a widower, (Mary Ann dying in 1885 in Nottinghamshire) and he is Head Gamekeeper, with:

There are clearly no children to Charles & Mary Ann, but Sarah Maria's son George Herbert, is now boarding at the Tuxford Grammar School, ten miles down the road. Did Charles help George Herbert, not having any sons of his own?

In 1901 Sarah and George are visitors staying with Jessie, Sarah's sister in law, on the outskirts of York. Again, Sarah is described as from Dilham, and George Herbert from Marske. Her brother James, Jessie's husband appears to have died in 1890.

And finally, in 1911 Sarah is back with her son George Herbert in Castleford.