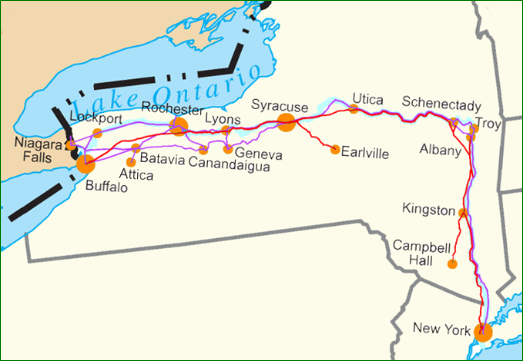 How did immigrants get to Orleans County?

The Great Lakes and Ohio were fertile, but transportation was a key issue. The Adirondack Hills to the south and the Catskills to the North formed a huge barrier which only had a few places to cross.

It was decided to build the Erie Canal from Buffalo to Albany, which together with the Hudson River going due South to New York, formed a viable waterway. By 1825 the canal was complete, and they took boats from Buffalo to New York in ten days through 270 miles of canal and 150 miles of the Hudson River to New York. This route fuelled the massive change in population in New York State, and assured New York as the financial capital. For more details click here: Wikipedia Samuel and Martha initially went to Somerset, about 10 miles northeast of Lockport.

Samuel and Martha’s family all lived in Niagara County or Orleans County:

One of their children was Sergeant Howard F Gotts who served in U.S. Army Air Forces and died in World War 2. Click here to read about him

This link to On The Water includes a description from 1839; “we went from New York by steamship to Albany and from there, partly by train, partly by canal boats that were pulled by horses, we finally arrived in Buffalo”  It seems that this was the most common way to get there.