Ernest Albert 1295, s of John William Marshall 714, was born in July 1878 in Newton St Faiths, Norfolk. He married Ellen 2023 Scott at Reach, Cambs in 1905, and they emigrated to Los Angeles. They were en route to S Africa from Canada, but liked the climate.

Ernest became a master stone mason, and created a 'masthead' for a major industrial plant in Hamilton, Ontario. (see right, above) They had several children, including Earl, whose son Ernest Albert provided much of this information. 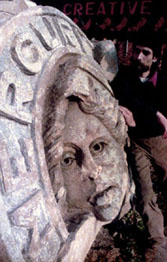