Albert Stewart and his brother Frank Abel, both living at 34 Macclesfield Road, Woodside, Croydon at the time. (tree #034) They were signed up in 1915 for 520 hours a year as orderlies at the Balgowan VAD hospital in Beckenham. This used to be a school in Balgowan Road, but was handed over to the Red Cross as an Auxiliary Hospital in Dec 1915.

Albert was on the books until December 1916, though it is not stated why he left. Frank’s record shows he also was on the books from July 1915 until 18 Dec 1916, when they both terminated their service and Frank joined HM Forces. 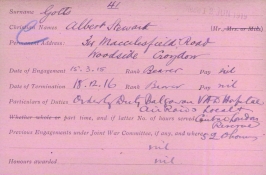 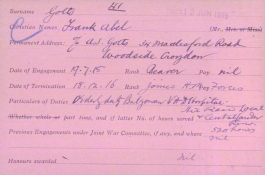