He signed up for unlimited service to the 16th Lancers in Norwich for 17 pounds 17 shillings, stating his age as 18, and a weaver from Castleacre.

The medic notes “slight aberration on each knee, of no importance, and 2 toes on each foot slightly overlapped, and a scar on the nail of forefinger, right hand.”

Not a lot to identify him by!

His record of service shows he spent 145 days in the 16 Lancers, then was transferred to the 17 Lancers.  After 5 years, there is another entry, where he is still a private, which seems to be the point in 1837 when he can claim 2 pence a day extra for good conduct. This rises to threepence a day in 1845, fivepence in 1846.

His medical discharge says he has “become unfit through age and length of service and not through indulgence”, so 24 years a private, and little to see on his service record except 5 Good Conduct badges!

So what did William do between 1823 and 1847? What exciting battles did he fight in?

In 1806, it was sent to assist an attempt to capture the Spanish colony of Buenos Aires, which proved unsuccessful. After moving to garrison Cape Colony, it then sailed to India in 1808. During its time there, it fought in the Third Maratha War (1817-18).

After William had left, it took part in the Charge of the Life Brigade.

All I can find in the narrative is that they spent 30 years on garrison duty in Britain!

We can get a bit of insight through where his daughters were born and where his wife is from:

That shows us where William was being garrisoned,and that fits with the view on the National Army Museum’s history of the Regiment. 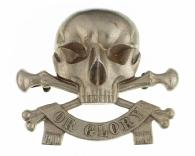 So no big battles, no promotions, just a steady job which paid quite well.

The irony is the motto on the cap badge, which infers ‘death or glory’, neither of which came to William!