Lifeboatman B Gotts at Seaham Harbour: is this George William 2264 in tree #022?

Ian Gotts of Kings Lynn spotted two images of a lifeboatman B Gotts on the East Durham history website. But who is he?

The “Skynner” was a ten-oared self-righting vessel (1887-1911) stationed at Seaham. She made seven launches and saved eighty-seven lives.

And here’s Mr B Gotts, second row second from the right.

In this one he is number 5.

Has anyone any other suggestions?

I can’t find anything on-line with the names of lifeboatmen for that time. If anyone knows a way to check this out then please let me know. 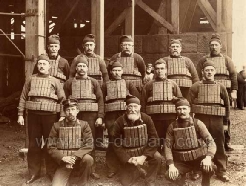 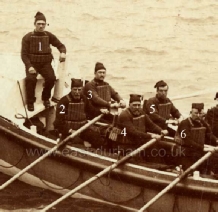 The tricky bit is working out who he is. There are very few B Gottses in that area, apart from Boaz, who would be 68 in 1895, when he died, so it clearly isn’t him. So the search was on for either a William known as Billy, or a Robert known as Bob.

Lifeboatman B Gotts at Seaham Harbour

The next page has a news article mentioning GW Gotts