Someone has suggested it could be Archie John Gotts born in South Repps in tree #022. He is listed in the 1911 census as gardeners boy.  South Repps is about 14 miles from Holt Hall.

In 1911 census he was living at Lower St, Southrepps, Norfolk with his father Matthew 484 and mother Mary Elizabeth 485. Archie was 19, so he would have been 20 when the photo was taken.

The week after the census, Archie John married Maude Towler at Bradfield, south of South Repps. Unless Maud was the cook or housekeeper she does not appear to be in this photo.

The people named in this photo have been used in posters around Holt Hall Learning Centre describing the jobs done by people at the Hall. The students who go there use this information as part of their project to understand what life was like at Holt Hall. The Centre helped by providing details of the book which I traced to Norfolk Family History Society's Kirby Hall.

Does anyone know more about Archie John, or recognise who it is?

I was made aware of a Mr Gotts who worked at Holt Hall. This turned out to be based on this photo taken in 1912 from a book called "The Story of Holt Hall by Theodore W Fanthorpe and Alan Childs".

Mr Gotts is a gardener (back left) but who exactly is he? Is he Archie John Gotts in tree #022? 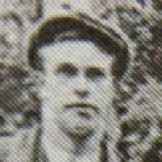 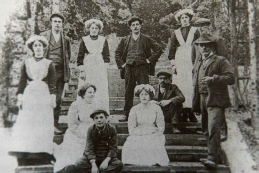 A longer article was published in The Norfolk Ancestor December 2016