Jim Gotts played for Ashington in the North Eastern League before the outbreak of war in 1939, but then disappeared from the football scene until resurfacing in Brentford's ranks during the 1945-46 transitional season. After scoring one goal in four outings for the 'Bees', he was recruited by Albion manager Charlie Webb in June 1946 for the return of regular League football, but a pre-season injury limited his opportunities.

(Trial games between the club's own players were the norm before pre-season friendlies came in in the 1960s.) “

Tim Carder, the Club Historian for Brighton and Hove Albion FC has provided this extra information:

“We don't have complete line-ups for the reserves, but the first game we have for him was 25/9/46 in a 2-1 defeat at Aldershot.

The two games he played for the first team were:

He wore the no.7 shirt on both occasions.

Further games we know of for the reserves:

A lively winger, Jim was one of seven players to appear down the right flank during the difficult 1946-47 campaign, but, at the late age of 29, there was little prospect of a career in the Football League and he departed from the first-class game on his release in May 1947.” 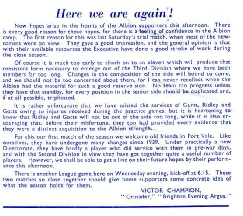 Alan Gotts has shared Jim’s WW2 service record, and on it we noticed when he joined up his medical record shows “excision cartilage right knee removed after to football injury 3 years ago. No disability”

This would be in 1938 when he was playing for Ashington, and it could be the ACL which may have caught up with him.