The will of William 4812 Gotts of Ixworth Thorpe

There is another Gotts will in Bury St Edmonds Archive, that of William Gotts who died in 1747 at Ixworth Thorpe. This is about 6 miles North-East of Timworth, all of which is agricultural land.

From the will we can identify:

This list is in order of size of bequest, assuming that older children get more. However, it is possible that some have already been provided for, eg John at the time of his marriage.

What is striking is the number of matching points in Sarah Teague’s affidavit:

a John, a George, a Samuel, their mother being Sarah. Also it is only about 6 miles away in sparsely populated land. Neither the order of appearance in the will nor the value matches the John/George/Samuel order in Sarah’s, but until we find their baptisms we can’t confirm the order.

There is also an uncle Philip referenced in Elizabeth Denton’s will: that could be Philip Gotts, or a Philip Denton on Elizabeth’s side.

What we haven’t been able to do yet is find the baptisms of all these children, because that will better show us the order of the children and whether they survived. All we can say at this point is that the people listed in the will were born after William Gotts married Sarah Clarke in 1731 and were alive in 1741 when the will was made. 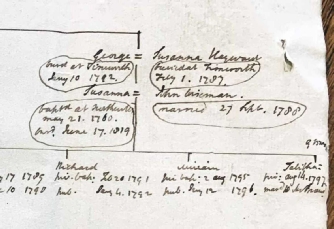 Going back to Sarah Teague’s affidavit, there is a second tree attached to the back listing the Wiseman children and the Georges and Susannah Gottses.

Thanks to Ben Wood for spotting