From the 1851 census we know that Mark Gotts of Bulphan, born in South Weald (not Bulphan) abt 1786; he married Sarah Livermore, born in Upminster abt 1803.

Mark Gotts the younger married Sarah Livermore 20 June 1830, Bulphan.  The witnesses were John Mann and Thomas Jinkins.  The record indicates that Mark was a bachelor, although he was 17 years older than Sarah.

From the marriage record we know that the father of Mark the younger is also Mark.  We find that Mark and Hannah Gotts are the parents of Mark who was baptized 24 Apr 1785 in South Weald.

The South Weald parish record also indicates that Mark and Hannah are the parents of the other known siblings of Mark the younger.

Potential links between Gottses in Essex 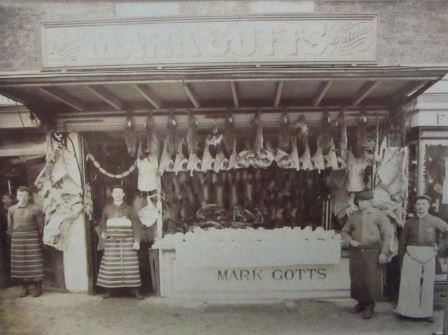 “A lovely characterful study of a butcher's shop c1890-1910. This is an original photograph, not a modern reproduction. All sorts of cuts of meat hanging up as well as sausages and rabbits.Two of the workers have their sharpening steels hanging in front of their aprons. And the one in the doorway holds up a butchers knife. The actual photograph measures 20.5 x 15cm. The reverse of the photograph has the photographers stamp of 'Rayner Green, Photographic Artist, Crescent Road, Brentwood Essex.' Mark Gotts appears in the 1901 census as being born in 1879, occupation Butcher and address of Kings Road Brentwood. Kings Road joins Brentwood High Street. So am not sure if this would be a separate home address or if he lived above the shop. Original glazed, maple veneer frame.”

Recently, a photo came up on eBay of Mark Gotts’s Butcher’s shop in Brentwood