Jesse Nicholas 1636 had two wives. He married Sarah 1637 Tandy in Gt Comberton, Worcestershire in 1865. Their children were:

Jesse married his second wife Mary Elizabeth 1639 Buxton in 1889 in West Ham. They had one child, Percy Nicholas 3063 Gotts, who had a family in Bulphan. 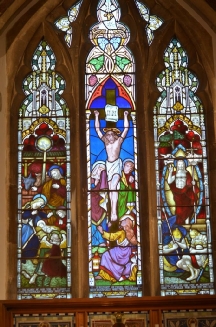 Visit to Bulphan in Essex

I took the opportunity to visit the church in Bulphan in 2012, where Gotts family #079 lived and still lives. The Rector there, Revd EW Hanson kindly showed me the various plaques and graves there. He also showed me the MI transcription of the graves there.

As he is interested in family history, he later sent through CMB records for Orsett and Bulphan as well as census information.

He had been led to believe that there had been Gottses in the area for 500 years, though like us had no records to confirm this, however he confirmed that there were still some Gottses living locally.

The central portion of the East window was paid for by Mark 2641 Gotts, and there is a plaque to his wife Sarah.

There are also several plaques in the church describing family members.

This confirmed many of the family dates and members, as well as adding several children who had died young.